AVIBRAS
Sociedade Avibras Ltda. in 1963 was testing prototype of A-80 Falcao, a side-by-side two-seat low-wing monoplane of wooden construction with plastic skin. Brazilian government contracts received for several projects, including single-seater with Volkswagen engine, but in 1967 the company withdrew from the aviation industry.

CONAL
The name stands for Companhia Nacional de Avioes Ltda. A prototype five-seat high-wing cabin monoplane Conal W-151 Sopocaba was designed and flown in August 1964, but none was produced. The company was licensed for conversions of the Dumod I and Dumod Liner made by the Right: Conroy Airlift, American Dumod Corporation (q.v.), but apparently none an outsize Canadair was built.

DEPARTAMENTO DE AERONAVES (PAR)
The aircraft department of the Instituto de Pesquisas e Desenvolvimento (IPD). From 1970 concentrated entirely on research, all design and development being handed over to Embraer. Between 1959 and 1964 it developed prototypes of the Beija-Flor two-seat light helicopter, designed especially for Brazilian conditions by Prof. Heinrich Focke, formerly of Focke-Achgelis.

HELICOPTEROS DO BRASIL SA
Founded 1978, with partial Aerospatiale of France shareholding, to assemble Aerospatiale SA 315B Lama and AS 350B Ecureuil helicopters, known locally as HB 315B Gaviao and HB 350B Esquilo respectively. Current programs encompass continued assembly of Esquilo plus the military AS 550 Fennec version, and AS 365 Dauphin and military AS 565 Panther (all Eurocopter types)

INDUSTRIA AERONAUTICA NEIVA SA
Formerly Sociedade Construtora Aeronautica Neiva Ltda, and since March 1980 a subsidiary of EMBRAER, when all work on the EMBRAER/Piper series of light aircraft and production of the EMB-202 Ipanema agricultural aircraft were transferred (over 780 built). Including earlier company, Neiva has produced over 3,200 aircraft since 1956, many under license from Piper and including Ipanemas, Urupema gliders, Cariocas, Coriscos, Tupis, Minuanos, Sertanejos, Senecas/Cuestas, Navajos, and Carajas.

IPT
Institute de Pesiquas Technologicas (National Institute of Technical Research) was concerned primarily with research into materials suitable for use by the national aircraft industry. Was also responsible for the construction of a small number of lightweight cabin monoplanes.

M.M. Super Rotor LTDA.
AC.4 single-seat autogyro dated from 1970s as a design of Altair Coelho. Marketed by this company after purchase of rights and many sold in assembled and kit forms.

OMAREAL
Oficina de Manutenco e Recuperaceo de Avioes Ltda, the Brazilian maintenance and overhaul facility based at Sao Paulo, acquired manufacturing rights to the Casmuniz 52 twin-engined five-seat lightplane in 1955. Designed and built by Cassio Muniz SA (q.v.), the Casmuniz 52 was intended for easy construction from single-curvature metal to facilitate field repair in bush operations. OMAREAL took over the flight testing of the sole prototype, but no production ensued

SOCIEDADE CONSTRUTORA AERONAUTICA NEIVA LTDA
Neiva produced Model N621/T-25 Universal trainers for the Brazilian Air Force and a series of lightplanes. In March 1980 it was renamed Industria Aeronautica Neiva S.A (q.v.), as a subsidiary of EMBRAER.

Santos Dumont also designed a helicopter, the picture of which was displayed on the cover page of the periodic "La Vie au Grand Air" of January 12, 1906. Due to technical difficulties to put such machine airborne, Santos Dumont pursued his dream of flying with a winged aircraft, instead. In 1906, Santos-Dumont took the nacelle of his dirigible balloon no. 14 and added to it a fuselage and biplane wings, whose cellular structure resembled the kites still found nowadays in Japan. An Antoinette V8 engine of 24 hp power was installed ahead of the wings, driving a propulsion propeller; the airplane flew rear-first and was denominated 14-bis (since it was descendent of the dirigible balloon no. 14). It had a wingspan of 12 m and 10-m-long fuselage, and had a tricycle fixed landing gear. Santos-Dumont developed what has to be called the first flight simulator, using winches and gears to let the 14-bis roll down a plan, while he learned how to control the plane. On 21 August 1906, Santos-Dumont made his first attempt to fly. He did not succeed, since the 14bis was underpowered. On September 13th, with a reengined 14bis (now with a 40 or 50 hp power engine which he obtained through Louis Bréguet), Santos Dumont made the first flight of 7 or 13 m (according to different accounts) above the ground, which ended with a violent landing, damaging the propeller and landing gear. On October 23th, 1906 his 14Bis biplane flew a distance of 60 meters at a height of 2 to 3 meters during a seven-sec-long flight. Santos Dumont won the 3,000 Francs Prize Archdeacon, instituted in July 1906 by the American Ernest Archdeacon, to honor the first flyer to achieve a level flight of at least 25 m. Before his next flight Santos-Dumont modified the 14-bis by the addition of large hexagonal ailerons, to give some control in roll. Since he already had his hands full with the rudder and elevator controls (and could not use peddles since he was standing), he operated these via a harness attached to his chest. If he wanted to roll right he would lean to his right, and vice versa. One witness likened Santos-Dumont's contortions while flying the 14-bis to dancing the samba! With the modified aircraft, he returned to Bagatelle on 12 November. This time the Brazilian made six increasingly successful flights. One of these flights was 21,4 sec long within a 220 m path at a height of 6 m. The Brazilian always used his Cartier wristwatch to check the duration of his flights. The flight experiments with the 14Bis took place at Le Bagatelle (air)field in Paris. Santos Dumont did not employ any catapult or similar device to place his craft aloft. As far as the world knew, it was the first airplane flight ever and Santos-Dumont became a hero to the world press. The stories about the Wright brothers' flights at Kitty Hawk and later near Dayton, Ohio, were not believed even in the US at the time. 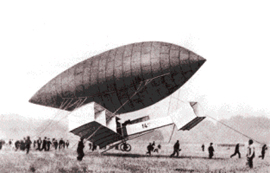 The dirigible no. 14 and the 14Bis during trials to evaluate its flight characteristics.
Source: Museu Aeroespacial, Rio de Janeiro 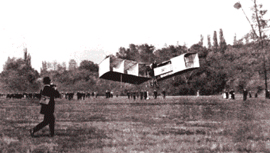 
The Brazilian aviation pioneer continued with his experiments, building other dirigible balloons, as well as the aircraft no. 19, initially called Libellule (later changed to Demoiselle) in 1907. It was a small high-wing monoplane, with only 5.10 m wingspan, 8 m long and weighing little more than 110 Kg with Santos Dumont at the controls. With optimum performance, easily covering 200 m of ground during the initial flights and flying at speeds of more than 100 km/h. Dumont used to perform flights with the airplane on Paris and some small trips for nearby places. The Demoiselle was the last aircraft built by Santos Dumont and the type suffered several modifications from 1907 to 1909. Santos Dumont was so enthusiastic about the aviation that he released the drawings of Demoiselle for free, thinking that the aviation would be the mainstream of a new prosperous era for the mankind. Clément Bayard, an automotive maker, constructed several units of Demoiselle. Dumont retired from his aeronautical activities in 1910. Alberto Santos Dumont, seriously ill and disappointed, it is said, over the use of aircraft in warfare, committed suicide in the city of Guarujá in São Paulo on July 23, 1932. His numerous and decisive contributions to aviation are his legacy to mankind. 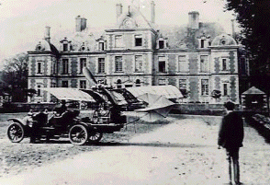 The successful Demoiselle monoplane, which Santos Dumont employed as private transport.
Source: Museu Aeroespacial, Rio de Janeiro
On the 7th January 1910, the first airplane constructed and designed in Brazil took off for its maiden flight in Osasco, São Paulo. The aircraft was conceived by the Frenchman Demetre Sensaud de Lavaud and was very similar to the Bleriot designs. The first flight was only 6-sec long. Afterwards, several other flights followed and the airplane, known as São Paulo, attracted huge crowds during its flights exhibitions. The aircraft was 100% Brazilian-made (even the propellers and the engine were manufactured by Mr. Lavaud). It was the first of several other designs developed in Brazil and the event took place long before the country could see aircraft serial manufacturing.

In 1899 in São Paulo the Strength of Material Laboratory of the Engineering Faculty Escola Politécnica was created. In the first years of its existence, the Laboratory performed tests with materials mostly employed in the civil construction. In 1926, the Laboratory evolved itself into the Laboratory for Material Testing also gaining research attributions and in turn gave later birth to the Instituto de Pesquisas Tecnológicas (IPT). The interest of IPT in aviation appeared from studies looking for application areas of wood in engineering. A report containing properties of numerous wooden elements, result of an extensive and systematic research, was published by IPT and was worldwide acknowledged. In 1938, Frederico Brotero and Orthon Hoover designed a monoplace aircraft of wooden structure. The first one of the four prototypes of the aircraft was constructed in the IPT facilities and finished in Rio Claro, a city located in the countryside in the State of São Paulo. The airplane was nicknamed Bichinho de Rio Claro (Rio Claro's mascot) but later it gained the IPT-0 denomination. The plane brought some aeronautical innovations, among them high-lift devices at wing leading edge, which became a standard feature for aircraft types developed later by IPT. The first prototype of IPT-0 was equipped with a 60-hp engine. The wing ribs and the fuselage were composed of freijó (Cordia goeldiana), a moderate-weight wood type, which was researched by IPT. The skin of IPT-0 was made of IPT-manufactured plywood. Bichinho was in operation until 1988. The experience gathered by making plywood elements for Bichinho enabled a creation of a unit for plywood manufactured at IPT, which started production in 1940. In 1943, engineers at IPT designed a new aircraft with more powerful engines ranging from 65 to 80 hp. Three prototypes had been constructed, each of them with a different motorization. All aircraft presented outstanding flight characteristics. In 1948, the Divison of Aeronautics of the IPT was created, originated from the Section of Aeronautics. The IPT designed a glider for primary instruction, the Gafanhoto, which was designated IPT-1. A public-domain report was published by IPT containing the required information to build the glider. The IPT-2 aircraft, also a glider, was nicknamed Aratinga and performed its maiden flight in July 1942. IPT built 17 different types of aircraft along its aeronautical activities. 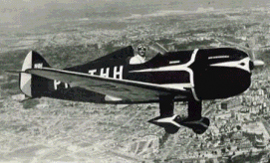 
In early 1951 Prof. Heinrich Focke moved to Brazil. He was head of the former Focke-Wulf Flugzeugbau AG, which designed and manufactured the Fw 190, considered by many specialists one of best fighters of the World War II. At Centro Técnico Aeroespacial (CTA), Prof. Focke conducted some ground tests with a vertical takeoff and landing aircraft, the Convertiplano. The BF-1 Beija-Flor helicopter was a Prof. Focke design from 1956, at this time still working at CTA. A two-seater, the Beija Flor had its 225hp Continental E225 engine fitted in the nose, with a short coupling to the rotor pylon, which was mounted centrally in front of the crew. An open structure tubular steel tail boom carried a pair of tail surfaces and a small tail rotor. The prototype flew on 1st January 1959, and performed an extended flight-testing campaign until it was damaged in an accident. It is thought that further work on the Beija Flor was then abandoned. A group of engineers working at IPD, an institute belonging to CTA, designed and built the twin-engined Bandeirante, an all-metal aircraft conceived to transport 20 passengers and that was able to operate at unpaved airfields. The Bandeirante was later manufactured by Embraer, which designed stretched civil and military versions of the type.

At the end of the 80s, the CTA adapted an aeronautical piston-powered engine to use ethanol as fuel. A Brazilian made T-25 Universal military trainer aircraft equipped with this engine successfully flew in 1989. Currently, there is research being conducted to introduce this kind of engine to agricultural airplanes.
The aeronautical activities of IPT and CTA led to necessary knowledge and the education of specialized people to support the modern Brazilian aircraft industry, which was born in the 60s and early 70s. Currently, Brazil has the fourth largest commercial aircraft manufacturer in the world, which has significantly contributed to the development of the regional aviation worldwide with comfortable, modern, and efficient designs.

Provided to the AIAA for the sole purpose of its Evolution of Flight Campaign. By Bento Silva de Mattos