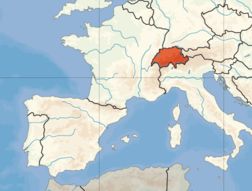 DÄTWYLER
Max Datwyler & Co, based at Bleinbach-Leupenthal, produced in 1960 a glider-tug based on the Piper Super Cub, designated MDC-Trailer. Produced subsequently a modernised version of the Bucher Bu 131 Jungmann, known as the Lerche. First flew in 1983 the prototype MD-3 Swiss Trainer. See MDB Flugtechnik AG

DORNIER
By 1926 the German Dornier works at Manzel had become too small, and the main factory was transferred to Altenrhein, in Switzerland. Here, for the next three years, Aktien Gesellschaft far Dornier Flugzeug was occupied in building three Do X flying-boats, the largest aircraft of their time, powered by 12 engines. Two were sold to Italy. Bomber designs followed, the Do N, P, and Y being built 1929-1931. These led to the Do F which, like the Do 11, began in 1933 to reequip the German Air Force. However, in 1932 production was resumed in Germany. The Swiss factory subsequently became the Eidgenossisches Flugzeugwerk (q.v.)

EIDGENÖSSICHE (CONSTRUCTIONS WERKSTÄTTE
Formed at Thun early in First World War. Made aircraft to designs of A. Haefeli, who was earlier with Farman and Ago. First was DH-1 pusher (six built in 1916) showing Ago influence; DH-2 was tractor which went into production as developed DH-3 (110 of these two-seaters built). DH-4 was fighter prototype of 1918; DH-5 (1919; 60 built) a DH-3 replacement; DH-5A a higher-powered version of 1928, with steel-tube fuselage (22 built). To a government specification of 1934 it built the C-35 multipurpose two-seat biplane as a replacement for the Fokker C.V-E, which it resembled, and which the company had produced jointly with Dornier since 1932. C-35 first flown in 1935; 80 delivered from 1937. (See also EIDGENÖSSICHES FLUGZEUGWERKE EMMEN .)


Founded 1934 as government-run R&D organization, with manufacturing, maintenance and upgrading capabilities. In an official specification of 1934 (see next entry) the company had designed the C-36 monoplane. Newly named EFW as above, it revived the design in 1938 and built 160 as C-3603. Of C-3604 development, only 13 were built. After the war became responsible for Swiss license production of various foreign aircraft for Swiss Air Force, including the British Vampire, Venom and Hunter (under Hawker Siddeley contract), several versions of French Mirage and US F-5E/F combat aircraft, plus French Alouette III helicopter. Produced C-3605 as turboprop conversion of wartime C-3603 fighter-bomber, used for target-towing. See F+W

FARNER AG. FLUGZEUGBAU 2
Farner AG. was an overhaul and repair organization which produced a two-seat biplane in 1934, and in 1935 a fourseat WF.21/C4 monoplane based on the three-seat Compte AC-4 Gentleman. Prototype WF.12 two-seater built 1943, powered by Cirrus Minor located behind cabin and driving via shafts a tractor propeller mounted at wing level. W.11  WF.12

MDB FLUGTECHNIK AG
Founded 1991 to continue development of the MD3-160, as begun by MDC Max Datwyler AG, which is currently being manufactured in Malaysia by SME Aviation (q.v.) as the AeroTiga

MDC MAX DÄTWYLER AG.
Max Dätwyler & Co, based at Bleinbach-Leupenthal, produced in 1960 a glider-tug based on the Piper Super Cub, designated MDC-Trailer. Produced subsequently a modernised version of the Bucher Bu 131 Jungmann, known as the Lerche. First flew in 1983 the prototype MD-3 Swiss Trainer. See above MDB Flugtechnik AG

Formed as Pilatus Flugzeugwerke AG in 1939, as a subsidiary of the Oerlikon armaments company. First aircraft was SB-2 Pelican six-seat light transport of 1944, but prototype only built. Followed by P-2 advanced trainer, produced in quantity for the Swiss Air Force in late 1940s, and the P-3 advanced trainer from 1953. Series

UETZ FLUGZEUGBAU
This company developed an improved version of the French Jodel D119 two-seat lightplane known as the Uetz U2V, first flown 1962. Series production began in 1964. In that year a redesigned four-seater, the U4M Pelikan, also went into production.