The first step towards the current FACH was taken by Teniente Coronel Pedro Pablo Dartnell when he founded the Servicio de Aviación Militar de Chile (Military Aviation Service of Chile) on December 20, 1910 being trained as a pilot in France. Although a school was included, the first officers were sent to France for their training as well. One of them, Capitán Manuel Ávalos Prado, took command over the Chilean military aviation school that was officially instated 11 February 1913 and remained in command until 1915. The Escuela de Aviación Militar was named in honor of him in 1944 and still carries that name today.

In those early years many aviation milestones were achieved, conquering the height of The Andes was one of the main targets as well as long distance flights. Typical aircraft of that era were Avro 504, Bleriot XI, Bristol M.1C, DH.9, and SE5a. In the following decade the (Airmail Line of Chile) Línea Aeropostal de Chile was created on 5 March 1929 as branch of the military aviation. This postal airline later developed into the airline Línea Aérea Nacional (National Airline) that is still the leading airline in Chile today. Shortly afterwards, on 21 March 1930, the existing aviation elements of the army and navy were amalgamated into a dedicated department: the Subsecretaria de Aviación (Department of the Air Force) effectively creating the current independent Air Force. It was initially named Fuerza Aérea Nacional. The international airport of Chile carries the name of Lan's founding father and first commander of the air force, Arturo Merino Benítez.

The first outlines of the organization of the current air force were visible in 1945 with the inception of Grupo de Transporte No.1 (First Transport Group), later renumbered Grupo 10, with two C-45s and a single T-6 Texan at Los Cerillos. Two years later the first Fuerza Aérea flight to Antarctica was performed. The fifties meant entry into the jet age for the FACh and Grupo 7 was the first unit to receive them in 1954. Chile got its aircraft from both the United States and Europe. The American supply consisted of F-80, T-33, T-34 Mentor, T-37, A-37 and F-5E/F for example, whereas the British supplied Hawker Hunters and the French delivered various helicopters and Mirage 50 aircraft.

ENAER  ==>  Empresa Nacional de Aeronautica Chile.
Founded in 1984 from former Indaer (q.v.). ENAER's first major undertaking was production of the piston-engined T-35 Pillan basic trainer, developed with Piper assistance and using many structural components from existing Piper lightplanes, and first flown as a prototype in March 1981, the first production aircraft flying in 1984. The current version, the Pillan 2000 with new wings of greater span developed by Technoavia in Russia, is offered with a piston engine or a turboprop. ENAER's second industrial program was assembly from kits and later construction of Spanish- developed CASA C-101BB and CC jets, delivered to the Chilean Air Force from 1983 as T-36 Halcon advanced jet trainers and A-36 Halcon light tactical attack aircraft respectively. From 1997 A-36s were redelivered by SAGEM of France as Halcon Us, after avionics upgrade. In 1995 production began of the Namcu aerobatic, training and utility lightplane of composites construction (first flown April 1989), which is also being assembled by EuroENAER in the Netherlands as the Eaglet. Other current activities include aircraft modernization, maintenance and repair, component construction and satellite work. 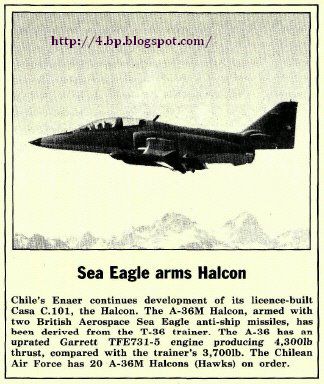 FABRICA NACIONAL DE AERONAVES
Founded in June 1953 with temporary facilities at Los Cerrillos Airport, Santiago, and later moved to new premises at Rancagua. Company was dissolved in 1960. It converted PBY-6A flying-boats into 28-passenger airliners and built 50 Chincol primary trainers for the Chilean Air Force (the prototype was first flown in December 1955)

MAESTRANZA CENTRAL DE AVIACION
Chilean Air Force Central Workshops; in 1947 built Tricolo- Experimental two-seat cabin monoplane designed by Alfredo Ferrer; first indigenous Chilean aircraft. In early 1950s Captain H. Fuentes designed H.F.XX-02 trainer, built at El Bosque Air Base. The Maestranza Central de Aviación HF XX-02 was a military trainer aircraft developed in Chile in the 1950s. It was a conventional, low-wing cantilever monoplane of mixed construction with fixed tailwheel undercarriage. The pilot and instructor sat side-by-side. Two prototypes were constructed at , designated XX-02 and XX-02B after which development was abandoned due to difficulties maneuvering at lower altitudes. In one case, this led to a crash in which the instructor was killed while attempting to land after a tight turn at low altitude.