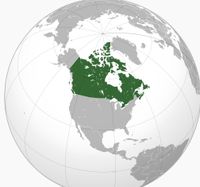 AVRO AIRCRAFT LTD.
Formed as part of Hawker Siddeley Group after acquiring Victory Aircraft Ltd. (Crown-owned) in July 1945. In 1946 Group took over Turbo-Research Ltd. Technical innovations brought company brief world fame. Built C-102 Jetliner, first jet transport on American continent, in 1949, though no sales followed. CF-100 was world's first straight-wing combat aircraft to exceed Mach 1 (in a dive, 18 December 1952). Type first flown January 1950 and developed as two-seat all-weather interceptor through five marks. About 700 built, serving in Canada and Europe and supplied to Belgian Air Force. Was to have been followed in production by CF-105 Arrow, with delta wing. First Arrow completed October 1957 and flew 1958; but project, February 1959 after expenditure of about $400 million. The Arrow was a victim of the widespread belief that the interceptor role could best be performed by a missile. Three years later Canada had to buy McDonnell F-101 Voodoo fighters from the USA. Also experimented with three-engined lift-fan Avrocar.

BOMBARDIER INC.
A division of this organization is the Bombardier Aerospace Group, which combines the activities of Bombardier Inc. Canadair, and de Havilland Inc., based in Canada, plus Learjet Inc. in the U.S.A. and Short Brothers Pic in the U.K

Formed December 1944 at Cartierville, Montreal, from Aircraft Division of ==> below Canadian Vickers Ltd., as a "Crown Company." Purchased 1946 by Electric Boat Company of New York; later that year became a subsidiary of General Dynamics Corporation. First contract (1944) to build the DC-4m (Merlin-engined version of the Douglas DC-4) for the RCAF. Eventually built 71, including commercial versions, and converted many wartime C-47s into postwar commercial DC-3s. Since 1949 has license-built more than 1,900 North American F-86 Sabre jetfightersforthe RCAF and the U.S. Military Assistance Program; more than 700 Lockheed T-33 SilverStar jettrainers; 200 Lockheed F-104 Starfighters for the RCAF; and 240 Northrop F-5s for the

CANADIAN AEROPLANES LTD.
Government-sponsored company, formed late 1916 taking over factory and staff of Curtiss Canada at Long Branch, Toronto, where over 1,200 Curtiss JN-4C two-seat biplanes were built. In 1918 license production began of Avro 504K to replace JN-4s at Canadian training establishments. One hundred ordered, but only one or two delivered before the Armistice. Also subcontractor for Felixstowe F.5 maritime patrol flying-boat.

CANCARGO AIRCRAFT MANUFACTURING COMPANY LTD
This wholly owned subsidiary of the Canadian Car & Foundry Company was formed about 1950 to build the Burnelli Loadmaster transport. Only the CBY-3 prototype was built, by CCF; the rights in this aircraft were acquired in 1952 by Airlifts Inc. of Miami, and reverted eventually to Ballard Aircraft Corporation


CANADIAN VICKERS LTD.
Established 1911 at St Hubert, Montreal, as subsidiary of Vickers Ltd. Aircraft division formed 1922; first Canadian company to build aircraft commercially. First contract was for six U.K.-designed Viking IV amphibians for Canadian Air Force. These followed from 1924 by 61 Vedette single-engined flying-boats and amphibians, its most successful product, designed in Canada by W.T Reid. During the 1920s six other designs appeared: the Varuna, Vista, Vanessa, Velos, Vigil, and Vancouver. Of these, only the Varuna (eight) and Vancouver (six) flying-boats went into production. In the 1930s the company license-built Fairchild and Fokker designs and Northrop Deltas. During the Second World War built 40 Supermarine Stranraer flying-boats for the RCAF, 230 Consolidated OA-10 Catalinas for the USAAF, and 149 Canso amphibians for the RCAF, plus hulls for 600 more Catalinas and fuselages for 40 Handley Page Hampden bombers. Took over Canadian Associated Aircraft in 1941, and in following year moved to government factory at Cartierville, near Montreal. In December 1944 became a separate autonomous company under new name of Canadair Ltd, later to become a subsidiary of General Dynamics.

CONAIR AVIATION LTD.
Specialises in converting a wide range of aeroplanes for aerial spraying and discharge, principally for firefighting roles but also for insect and pollution control. Has developed the Helitanker tank for helicopters.

CUB AIRCRAFT CORPORATION LTD
Established 1937 at Hamilton, Ontario, to build American Piper Cubs. Early 1931 obtained license to build Harlow PJC-2 all-metal monoplane. New factory at Hamilton was completed 1940. Production resumed in 1945 of Canadian variant known as Cub Prospector; company does not appear to have survived for more than a year or so after this.

CURTISS-REID AIRCRAR COMPANY
Founded in Montreal in January 1929 by a merger of the Reid Aircraft Company (founded 1928) and the Curtiss Aeroplane & Motor Co of New York. W. T. Reid, formerly chief designer of Bristol Aeroplane Company, had founded Reid Aircraft to build a light biplane of his own design. This was produced by the new company as the Curtiss-Reid Rambler, powered by a license-built Cirrus engine, and at least six of these aircraft were supplied to the RCAF. Opened flying school in 1930. Built also the Courier, a single-seat lightweight mail-carrying monoplane.

FOUND AIRCRAFT CANADA INC.
Production has begun on our new model, the Expedition E350, an FAA certified 5 seat, tricycle gear. Gross weight is 3800 lbs., 315 h.p Lycoming IO-580 engine. Its low stall speed, large fowler flaps and impressive rate of climb, even at gross weight, enables this aircraft to be a genuine STOL aircraft. Its cruise speed of 160 knots combined with its impressive range makes the E350 a true cross-country aircraft.

HELICOP-JET
Based in Canada for project management, but with French connections in helicopter development; first flew in France in 1976 and 1984 two prototypes of a four-seat helicopter with rotor driven by cold-air tip jets. Program halted.

KELOWNA FLIGHTCRAFT GROUP
Offers the CV5800 as an extensively reworked, modernized and lengthened Convair CV580 (first flown February 1992), with improvements including a "glass" cockpit using display screens and adoption of turboprop engines; CV340 and CV440 can be similarly upgraded. Operates an extensive fleet of aircraft under its Kelowna Flightcraft Air Charter division, and undertakes repairs, modifications, and maintenance.

NATIONAL STEEL CAR CORPORATION LTD.
In 1938 this company entered into an agreement with Westland Aircraft of Great Britain to manufacture Westland Lysanders for the Canadian Government and later for the RAF. Under a similar arrangement National Steel Car also made North American Harvards, and contracted to build Yale trainers for Canada after the fall of France

NOORDUYN AVIATION LTD.
Designed and manufactured the Norseman eight/ten-seat cargo-transport aircraft, which first flew in 1935 and was delivered to the RCAF and the USAF; with the latter service it was designated C-64A. Norsemans were especially popular as bushplanes in the northern regions of Canada and with civilian operators in northern Europe. The Canadian Car & Foundry Company acquired Noorduyn's assets in 1946 and produced an improved Norseman Mark V until 1950. Noorduyn license-manufactured North American Harvard trainers during Second World War for both the RCAF and RAF

OTTAWA CAR AND AIRCRAFT LTD.
This prewar manufacturer of street-cars entered the aircraft industry as Canadian agent for Armstrong Whitworth, Avro, and Armstrong Siddeley, and built Avro Tutor and Prefect trainers and Armstrong Whitworth Atlas and Siskin fighters for the RCAF. During Second World War parts for Hampden bombers, Hawker Hurricanes and Avro Ansons were manufactured, and Anson airframes shipped from England were assembled

REPLICA PLANS
Markets plans to construct the S.E.5A as an 85 percent scale replica of the First World War fighter

ROE, A.V.
In 1945 U.K. company A. V. Roe acquired Victory Aircraft Ltd factory at Toronto/Malton Airport, where Lancasters, Lincolns, Ansons and a York were built during Second World War. New company named Avro Canada, and it produced the first Canadian-designed jet fighter, the twin-engined CF-100. Prototype flew in 1950; 639 were built for the RCAF and 53 for the Belgian Air Force. Flew prototype C-102 Jetliner in 1949, but no production order was received. Avro Canada became a member of the Hawker Siddeley Group in 1955, and in 1962 became Hawker Siddeley Canada Ltd. CF-105 Arrow delta twin-jet all-weather fighter prototype flew in 1958. Only five CF-105s were built before the project was cancelled in favour of Bomarc surface-to-air missiles. An interesting project was the Avrocar VTOL aircraft developed under a U.S. Department of Defense contract and flown in 1959 in California. In its prototype form it was circular: a flying saucer!

VANCOUVER AIRCRAFT
The temporary name in 1938 of Boeing Aircraft of Canada Ltd (q.v.). When it became wholly Canadian-owned it soon reverted to the earlier title

VENGA AEROSPACE SYSTEMS INC.
Signed agreement in 1994 with Baoshan Iron & Steel Complex in China to develop Timberwolf turboprop-powered sporting aircraft plus a jet trainer based on the Venga TG- 10 Bushfire

VERTOL AIRCRAFT COMPANY
A wholly-owned subsidiary of Vertol Aircraft Corporation, the Canadian Company was operated as completely independent. It was formed in February 1954, on former RCAF airfield at Arnprior, Ontario, initially to service and overhaul helicopters. Entered production with the Model 42A, a modified version of the Piasecki (Vertol) H-21 helicopter. A tandem-rotor general-purpose helicopter, it accommodated a crew of 1/2 and 18 passengers.