The history of the Bulgarian Air Force can be traced back to the end of the 19th century, when in 1892 at the Plovdiv International Fair two lieutenants of the Bulgarian Army flew with the ‘La France’ airship of the Frenchman Goddard. Later, being inspired by the flight, they succeeded to convince the General Staff that the Bulgarian Army should build a balloon force. The Imperial Aviation School in St. Petersburg enrolled Lieutenant Vasil Zlatarov as a student, following numerous refusals from military schools around Europe to teach Bulgarian officers to use airships. On 20 April 1906 “Vazduhoplavatelno Otdelenie” (roughly translated as Aviation Department) was created to operate observation balloons for the army. After graduation Lt. Zlatarov was appointed its first commander. The first generation of Bulgarian aviators were trained on a balloon named ‘Sofia-1’, constructed by Zlatarov with materials bought from Russia.
In 1910 a Russian aircraft engineer, Boris Maslennikov, was invited to Bulgaria, where he presented his airplane, a modification of the French Farman III. Following his demonstration assisted by Vasil Zlatarov over the hippodrome in Sofia, the Bulgarian Government decided to acquire airplanes for The Aviation Corps. In early 1912 thirteen army officers were sent abroad for training as pilots and orders were placed for five French, British and German airplanes. In June 1912 Lt. Simeon Petrov[1], training at the school of Louis Blériot in France, for the first time in the history of aviation succeeded to land an airplane with a stopped engine. The event was praised in the French newspapers and La Poste, and the French mail service acknowledged it by publishing a stamp. The officers sent to France completed their training first and returned to Bulgaria in July 1912. The same year Bulgaria received its first airplane – Bleriot XXI with which on 13 August 1912 Simeon Petrov flew to become the first Bulgarian to pilot an airplane over Bulgaria.

LAZAROW, CWIETAN
Worked for DAR before Second World War. From 1946 built the LAZ-7M; LAZ-8 four-seat taxi; LAZ-11 ambulance version of -8; and LAZ-12 single-seat aerobatic aircraft. All except the LAZ-7 sporting monoplane were built in prototype form only. The LAZ-1 OH light helicopter was abandoned before completion. All powered aircraft production in Bulgaria ceased in 1961. 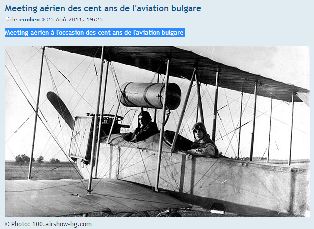